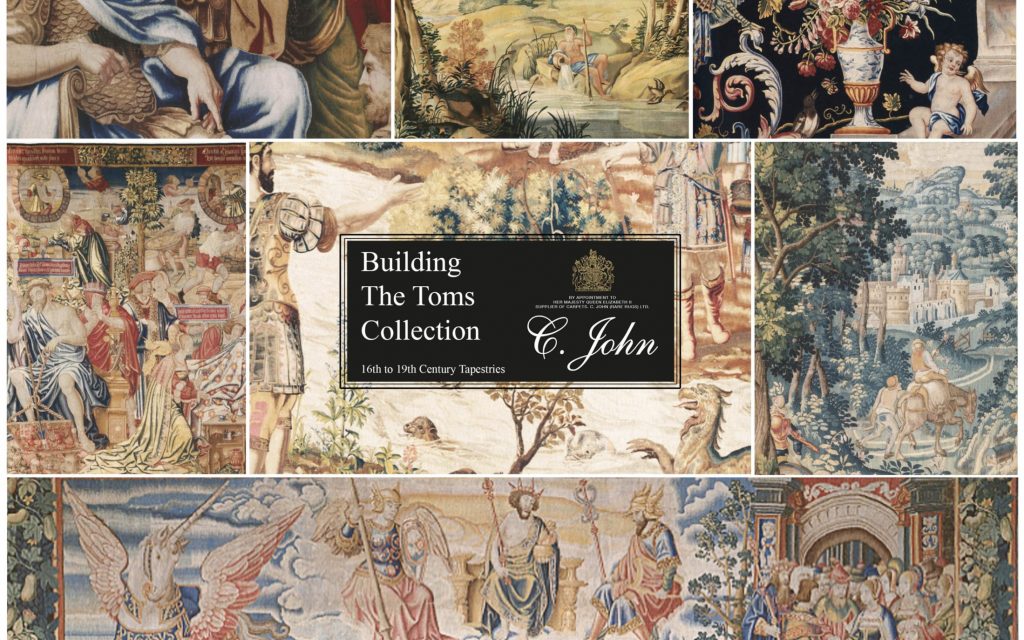 The Toms Collection is one of the most important ancient tapestry collections in the world. It comprises of wall and decorative tapestry pieces, representing major early sixteenth- to late nineteenth-century European manufactories.

Reginald Toms (1892-1978) an English property developer, had a very successful career and amassed a fortune in real estate. Reginald and his wife Mary (1901-1993) settled in the Château de Coinsins, in the French-speaking part of Switzerland, close to Geneva.

Around 1958 they discovered a passion for ancient tapestries and, in the sixties and seventies, made the acquisition of some one hundred pieces, which was bequeathed to the State of Vaud by Mary Toms in 1993 and is now managed by the Foundation Toms Pauli.

As soon as Reginald and Mary moved to Château de Coinsins in 1958 they began work decorating their new abode. Nobody really knows exactly why they became so interested in collecting tapestries and rugs. But between 1959 and 1969 they literally had a buying frenzy purchasing tapestries, rugs, furniture and various textiles.

They acquired all of their collection on the London art market from antique dealer C. John or with C. John as their agent from auction. Reginald had been a client with C. John, proprietor John Cohen before they moved to Switzerland and was their only supplier during the 1960’s and 1970’s.

From 1959 to 1966 alone Reginald purchased 44 pieces of furniture, 104 rugs, 57 tapestries and 40 embroideries from C. John. Through detailed investigation of the invoices found at Coinsins and meticulous cross checking with the archives at C. John, the foundation were able to trace the provenance of most of the works in the collection.

Many came from auctions, mainly at Sotheby’s and Christie’s in London or estate sales. They were purchased by John Cohen and immediately resold to Reginald and then shipped to Coinsins after any necessary cleaning or restoration.

The friendship between the Toms and John Cohen grew stronger over the years, which has been reflected in correspondence between them that has been preserved. While in 1960 John used the formal ‘Dear Mr. Toms’ when writing to his client, in 1967 he referred to him as ‘Dear Reginald’ and by the beginning of 1972 ‘Dear Reg’.

Mr Toms took the advice of C. John in all of his purchases. But what is known, thanks to information provided by Leon Sassoon, Cohen’s nephew and the current owner of C. John, is the shop was his home from home when Reginald was in London.

Following the death of both John Cohen and Reginald Toms in 1978, Leon Sassoon continued to advise Mrs. Mary Toms regarding the collection and visited her in Switzerland at least twice a year until her death in 1993.