Origins of the Various Types of Carpet from Around the World 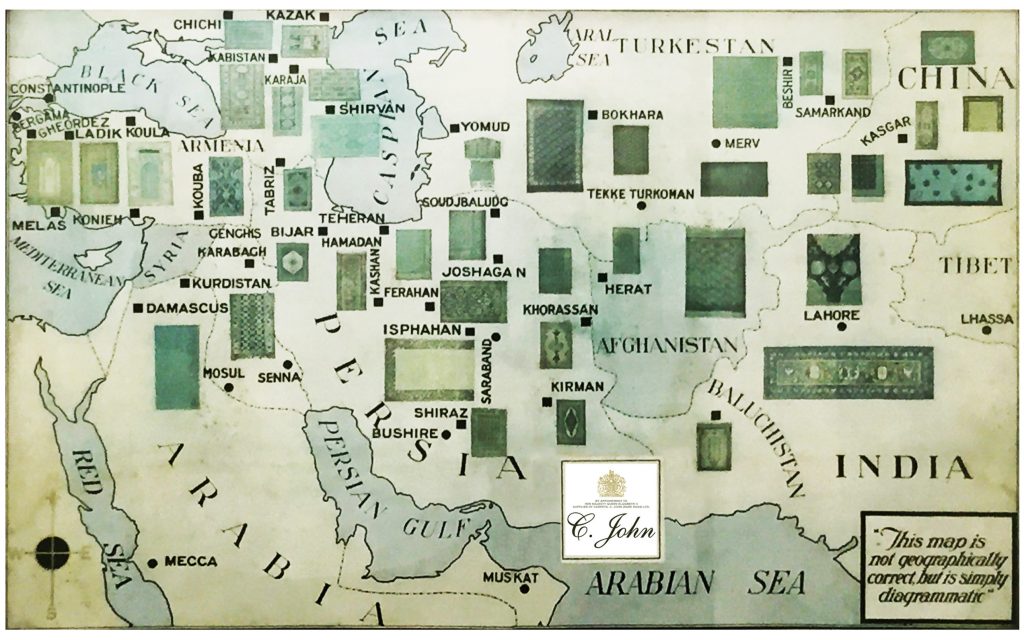 This map is not geographically correct but is simply diagrammatic

Armenia used to be part of the former Soviet republic, which borders with the mountainous Caucasus region straddling Asia and Europe. It was one of the earliest Christian civilizations and it’s defined by religious sites going back as far as the 4th-century. It is the home of the following carpets, Gheordez, Ladik, Koula, Melas, Konien and Kouba.

Azerbaijan and Georgia the two countries next to Armenia and above Iran, situated between the Black and Caspian Sea. Both these countries were former members of the Soviet Union and realised their independence in the early 1990’s.  They are situated in the mountainous Caucasus region and are both extremely rich in history with some of the first evidence of civilisation dating back to the stone age.  These two countries are home to the following carpets, Chichi, Kazak, Kabistan, Karaja, Shirvan and Tabriz.

Turkestan has never referred to a single national state, although the area was at one time ruled by an Emperor. Turkestan was used to describe any place where Turkic peoples lived.  The present-day Turkestan is Turkmenistan, Kazakhstan, Uzbekistan, Kyrgyzstan and Xinjiang (East Turkestan or Chinese Turkestan) Turkic regions of Russia (Tatarstan and parts of Siberia) as well.  Turkestan is home to Yomud, Bokhara, Beshir and Samarkand carpets.

Persia – The Persian Empire consisted of a series of imperial dynasties. The first known dynasty was established by Cyrus the Great in 550 BC, with the Persian conquest of Media, Lydia and Babylonia, which was then proceeded by 8 more dynasties that spanned right up to 1979. The main religion of this ancient empire was Zoroastrianism.  Since 1979 Persia is now known as (Iran) which is an Islamic republic. Ancient Persia is home to the largest variation of fine rugs and carpets in the world, hence we refer to these types of carpets as ‘Persian Rugs.’ The carpets are, Bijar, Teheran, Hamadan, Kashan, Ferahan, Soudjbaludg, Joshagan, Isphahan, Shiraz, Khorassan and the Kirman.

Arabian Peninsula, simplified Arabia – Sometimes referred to as the Island of Arabs is a peninsula of Western Asia situated north-east of Africa on the Arabian plate.   This is the largest peninsula in the world, and consists of the countries Yemen, Oman, Qatar, Bahrain, Kuwait, Saudi Arabia and the United Arab Emirates as well as parts of southern Iraq and Jordan. This collection of countries is home to the following carpets, Karabach, Kurdistan and Damascus.

Afghanistan – officially known as the Islamic Republic of Afghanistan which is a landlocked country bordered by Pakistan in the south and east; Iran in the west; Turkmenistan, Uzbekistan, and Tajikistan in the north; and China in the far northeast.  The country’s strategic location along the Silk Road connected it to the cultures of the Middle East and other parts of Asia.  It has always been a crossroads where numerous civilizations have interacted and often fought throughout history. Excavations of prehistoric sites suggest that humans were living in Afghanistan at least 50,000 years ago, and that farming communities are some of the earliest in the world. Afghanistan is the home of the Herat carpet.

India, officially the Republic of India is a country in South Asia. It is the seventh-largest country by area and the second-most populated country in the world.  The first recorded civilisation in India dates back to 30,000 years ago.  In subsequent years the country has moved through many different religions and occupations but needless to say it has an incredibly rich history.  India is the home of the Baluchistan carpet.

China is the most populated country in the world.   After China’s prehistoric history they were ruled for centuries by Dynastic rule the first dynasty emerging in 2100 BC. Then is 221BC the State of Qin conquered the 6 kingdoms and that was the beginning of a unified China also known as imperial China.  Dynasties ruled China right up to 1912 at which point China became the republic of China and emerged into a communist dictatorship. China is home to the Kasgar carpet.